Colin Archer was a Norwegian naval architect, born in Norway in 1832. His Scottish parents moved to Norway six years before he was born, and the family settled at the beautiful Tolderodden in Larvik. As a young man, he lived some years in Australia where he built up a big farm together with his brother, James. He returned to Norway in 1861 economically independent, to start his own business as a naval architect and boat builder. Colin Archer became famous for building seaworthy vessels of all kinds. One of the most famous is the polar ship 'Fram', which brought the Norwegian explorers Nansen and later Amundsen on their voyages to the Arctic and Antarctic. He is also world famous for his designs of pilot boats and rescue cutters. When Colin Archer died on February, 3rd 1921, he was 89 years old. He had built over 200 ships, 70 yachts, 60 pilot boats, 14 rescue cutters and 72 other vessels.

Colin Archer is often associated with rescue vessels and pilot boats, but he started with building yachts. In 1867 he built his first yacht, 'Maggie', and she was in the Archer family for years. Other known pleasure yachts built by Colin Archer is "Venus" and 'Storegut', built for Wilhelm Wolf who won a lot of prizes with the yacht. Colin Archer built 70 yachts in total. 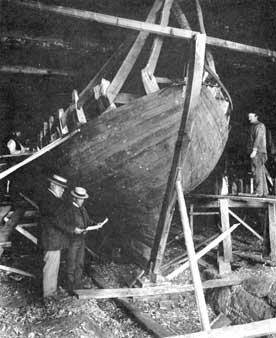 Around the year 1870, a lot of pilot boats were lost at sea. This was the reason why Colin Archer designed a boat that should make piloting more secure. She was called 'Minnie'. The pilots praised the ship for its manoeuvrability and seaworthiness, but Colin Archer was not satisfied. A year later he built the 'Thor'. This ship was the prototype for the pilot boats as we know them now. From 1876 Colin Archer built all his ships according to the 'wave line principle', the theory developed by the British engineer John Scott Russell. According to this theory there are two kinds of waves when a vessel moves through the water, one at the bow and one at the back of the ship. To reduce the resistance, the ship should be built according to these two types of waves. Although Colin Archer spent a lot of time on building all kinds of vessels, he was never prepared to let go of his principle that the safety and solidity should be the most important matters for building a ship. Buyers could negotiate on price, but never on safety. The fact that quite a few of the boats built by Colin Archer are still sailing, shows that what he said were no hollow phrases. Some of those ships are more than a hundred years old.